The GoGo Board was conceived in 2001 by Arnan (Roger) Sipitakiat and Paulo Blikstein while both were graduate students at the MIT Media Laboratory. It was hugely inspired by the MIT Cricket and the IRX board. GoGo Board 1.x and 2.x were tethered-only devices, allowing children to create games and simulations that incorporate sensors and actuators. Both Arnan and Paulo are originally from developing nations (Thailand and Brazil.) A strong emphasis was made on allowing the GoGo Board to be locally produced. The original GoGo Board used a single-sided printed circuit board and components that were easy to solder (“thru-hole” components.) Extensive research was done in the electronics street markets in São Paulo, Mexico City, and Bangkok, to make sure that all the components were available. This DIY approach made the board low-cost and available in countries where imported goods were prohibitively expensive or simply not available.

GoGo Board 3.x incorporated a Logo compiler that allowed the GoGo Board to be programmed and run autonomously without being connected to a computer. in 2007, when Arnan got his PhD., MIT gave permission to open source the GoGo Board platform. Arnan and Paulo continued the development, although not actively. In 2009, the GoGo Board 4 was released. It featured an integrated USB port. Interest in the GoGo Board increased with this release. Although not fully commercialized, this is the first GoGo Board that become widely used, with almost two thousand boards produced during its six-year lifetime.

Version 5, released in 2015, is a complete redesign of the GoGo Board. The abundance of DIY electronics that had emerged has made the emphasis on “making your own board” less relevant. This version then made full use of the latest miniaturized parts available on the market. Even though it is not possible to assemble a GoGo Board 5 with simple soldering irons, a number of key technical advancement have been included. Installation was greatly simplified: the GoGo Board now appears as a device similar to a keyboard or mouse, so no driver is required, offering a true plug-and-play experience on any platform right out of the box. The Logo language has also been improved to feature many new functionalities. A block-based visual programming environment called Tinker has also been developed alongside the classic text programming environment. The GoGo Board 5 is designed to make use of the Raspberry Pi. This feature enables the use of advanced peripherals like cameras, sound, GPS, etc. Smartphones can also be incorporated. 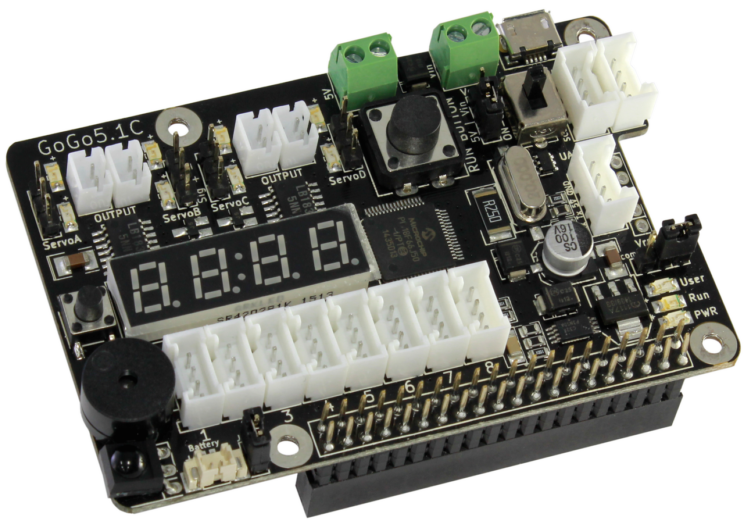 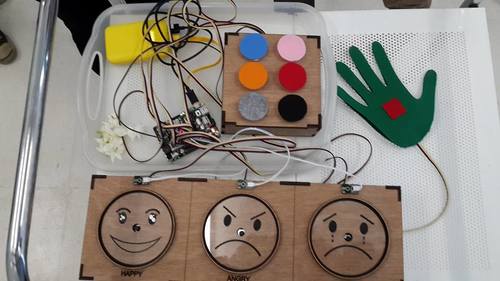